“Uncle, Look!” yelled Molly, from the diving board, a small carton of strawberry, low-fat milk in one one hand, and half of an unripened peach in the other.

She continued the mantra, again and again, demanding attention. “Uncle, Look!” she yelled, noticing that her shadow waited for her at the bottom of the pool — it looked up at her, bothered by nothing except a few maple leaves that floated on the water’s surface.

“You remember when I named this street?” Molly’s grandfather tried to tell her Uncle.
“Yes. Maple Street. We remember,” said Uncle.
“Because of all the maple trees, you see? Quite appropriate, not to mention an admirable claim to fame if you ask me. The maple leaves make quite the bustle here, on Maple Street,” said Grandfather.
“As did the gays, right?” said Uncle.
“Oh, don’t get me started on that. Gay St. Is no name for a street and you know it.”
“You realize that ‘Gay’ was the surname of the city’s founders, right? Their legacy now thrown to the wind, on the noxious fumes of your petty insecurities.”
Summoned by the smell of Molly’s fresh peach, four pigeons landed, one at each corner of the pool.

At Uncle’s feet, a gaggle of girls sloshed together in a red, plastic mixing bowl a variety of picnic leftovers, creating for themselves a voodoo potion to cast on their crushes: mango salsa, burnt almonds, orange rinds. It was plenty to distract Uncle from Grandfather’s rambling. “What’s wrong with you girls? You were all okay until I fed you.”

“You feed yourself plenty too,” Grandfather mumbled.

The owner of the house emerged from the backdoor of his home office, a spectacle in its own right. The office was soundproof on all sides, constructed with special glass that fogs at the push of a button to offer privacy.

“Do you girls like music?” the owner asked, followed by a chorus of high-pitched, excited squeals. At the push of yet another button, cement blocks surrounding the pool began to slip down into the ground. From the holes, large speakers emerged atop carbon fiber stalks, to perch like eyes atop an insect. 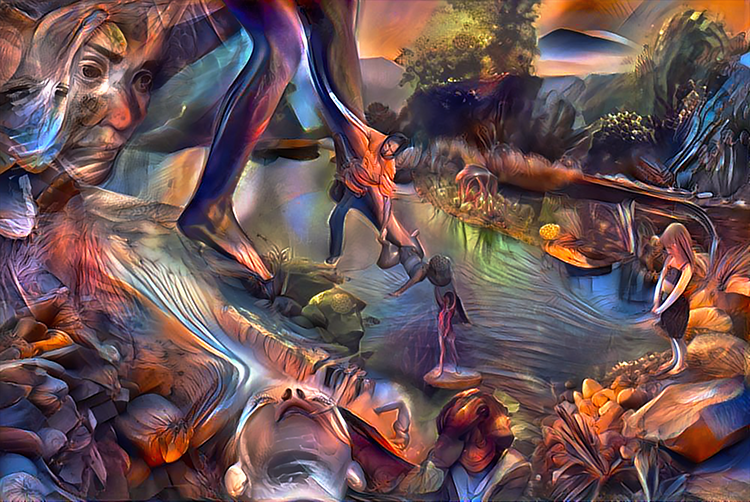 “Uncle, Look!” Molly yelled from her diving board stage. At the start of the song, a custom waterfall kicked on, and lights at the bottom of the pool began to pulse to the rhythm of the music, their colors cycling between teal blue, royal purple, and rusty orange.

“Brown eyes, you will be on my knees,” mumbled Uncle to himself, gazing towards the only girl at the party permitted a two-piece; here he was, finally, experiencing something real, something somewhere in the vicinity of an emotion.

“Uncle, want to see a trick?” Molly cried out.

But everyone’s attention, save the birds, was elsewhere. There she was, one performer, one rejection. Molly would be forced to resort to her imagination, and the birds, and her reflection at the bottom of the pool. But this little girl in short-shorts, always living in motion, would have no trouble beginning this, the beginning of one more meaningful human short.

Molly looked out across the yard, she looked to the masses of lions in the audience, ready to roar in a resounding ovation. She looked beyond the lions to the excited rabbits, who were so very eager for her tricks. She even acknowledged the pigeons, re-imagining them as doves ready to escape a metal cage in a cloud of smoke and fire.

What started as a sleight of hand, became–when the moment surfaced–quite a bit out of a hand, here in the culmination of what was to be this most memorable image.

“Don’t forget, you came from your mother’s balls,” Molly overheard Uncle scream into his cell phone.

But she knew there was no point in waiting. Water sports are for the truly decisive, so Molly gave up to the sea. It was in that moment, that she made a mess of combining herself with the water, her lips with the cement that held it, her knees with the rocks that lined it. In that moment, she was the pool, and the water pooled into her eyes. In the first moments of her leap, she believed she had found a new feeling, a meaning for being part of the spectacle of this massive stage. But her show broke into a chain reaction of calcium-carbonate, bits of bone erupting from their origins.
Her teeth ejected from her face. Blood surfaced before she did. Adults and children alike scattered and screamed, jumped into the water and out. All the while, the pain intensified, while rhythm and blues continued to blare from the speakers, interrupted only by the sirens of emergency vehicles.

The doctors seemed confident they could fix the jaw and the teeth, if nothing else. Molly was given something, by someone, for the pain, and asked to count and squeeze their hand.

“How can you fix that?” Uncle said, his face a sickly white.

Taking a deep breath, the doctor explained, before disappearing behind doors and curtains onto his own stage.

“No, really. I mean, look at it. How do you fix something like that?” said Uncle.
“Well you know, a touch of this, of that, of checkers, of stars, of ideas that seem easy, if only done the other way around,” said the doctor, out of sight, having already exited stage left.