“If it doesn’t have a name, how will Santa find it?”

“I’m not one who rises to the occasion.”
“I’m easy to get along with when things go my way.”
“Use your friends wisely.”
“It’s not a pretty life but someone has to live it.”
Bob was nothing more than speechless, dumb furniture, cursed to a stationary life in the family’s living room, to endure a never-ending marathon of Jeopardy reruns, and merry-go-ground of intolerable dead trees that ‘kept him company’ one month every year.

Christmas day, Taylor woke mother at 5:32 AM. She groaned as she rolled and flipped to her side, groggily unbuckling from her face the Continuous Positive Airway Pressure device — her Darth Vader mask, as it was endearingly referred to by the family, despite her protest.

Mother urgently grasped at the mound of paper towels she kept atop her night stand. Into their already-crusted folds, she expelled from the depths of her lungs a violent stream of dark-brown mucous and the tarry remains of previously-smoked Virginia Slims Lights 120s. With this morning ritual, she temporarily relieved herself of what would otherwise result in a deep, rumbling, persistent and creature-like cough, following her well into the late afternoon.

Mother’s eyes darted first to the clock, and then to a brown, half-open mahogany drawer. Her decoy pillow had slipped, revealing a mostly-consumed bottle of vodka.

“It’s going to kill you,” said Taylor.
“You can’t see the future,” said mother.
“You can intuit the future by observing others…” said father.
“Don’t start,” said mother.
Bob chimed in, “…by touching their bodies, by sensing the dulled flow of blood through their organs, by spying their glances.”
Mother coughed again.
“…by catching their colds.”

Taylor sat cross-legged under the tree, passing presents. His sister received smoked salmon, which she took to her room to consume in private, slamming the door behind her. Mother received slippers to warm her feet. Father received a plumbers wrench… for reasons unknown. Taylor received a bug net, a laser tag set, and a handwritten letter from Mr Rogers.

“I told you he would write me back. An hour-long special on how marbles are made airs soon.”

The neighbor boy arrived to flaunt his bounty: a Rasta Tam hat with fake dreadlocks sewn in, a pair of Oakley sunglasses, and a hacky sack.

“Can we use the car to run it over?” asked the neighbor boy, eager to crush the beans and soften the tight red, black, green, and yellow stitching.

The two boys excitedly bounced from room to room, toys in hand, eager to let their imaginations run wild in the absence of adult supervision.

“Truth or dare?” said the neighbor boy?
“Dare,” said Taylor, gathering the momentum required to slide down the long hall on his socks, towards his sister’s room. Muted screams seeped from under her closed door.

Three cheers to cirrhosis and filth,
Surrounded by pustular cohorts with meth,

Taylor’s sister sat atop the bed, focused, unperturbed. Taylor crawled into her bed and snuggled up close.

The neighbor boy crawled behind the bed, and peeked over her shoulder. “Dare.”
Both boys were confounded by the mysterious symbols that occupied sister’s attention, an alien language—in retrospect, a monotonous repetition of organic chemistry and calculus—that stirred their imaginations. Perhaps it was these symbols, these caricatures, these mystical runes that compelled the musicians to continue their caustic, guttural chants.

Stabbing her way through rhythm in stealth,
Death smiles wide as she slinks from her sink.

Sister remained quiet, but kicked Taylor off the bed, with a single extension of her hairy legs. Feeling unwanted, the boys retired to the front yard, to stage a laser-ladened, grenade-kicking, trench-hiding, military theatre. The glorious battle raged on, for what seemed like hours, until it was abruptly terminated, a most unceremonious end to 3 Hack Slap. Tap, tap, tap. Taylor ran.

“Bitch!” the neighbor boy yelled, grabbing the sack.
Taylor froze, looking back.
“Truth or dare?” the neighbor boy asked, not waiting for a response. He wound up and, without hesitation, fired his reggae-grenade side-arm. It whizzed through the air, colliding directly with Taylor’s groin, beans to beans. Taylor fell to his knees and rocked, like a newborn baby, to the intense and unfamiliar pain that sprouted in the pit of his stomach. Shock wore off and emotions flared. Curses, blades of grass, and half-hearted punches flew. But just as a baby cries and laughs in the same breath, when the sun then started to set, so too did Taylor’s anger recede. Knowing they’d soon be called in for dinner, they abandoned their skirmish, and set out to catch the first crickets of the early evening from the purple-flowering bushes that smelled of honey, lavender, and wet wood. They brought their prisoners into the kitchen, to nudge into mason jar prisons for extensive, clinical observation.

“Let’s play doctor,” the neighbor boy said.
“Don’t forget the stick and leaf,” said father. “Actually, you realize that’s not a cricket, right? It’s a praying mantis. Did you know they only have one ear? And binoculars for eyes?”

The boys stared in awe at their miniature martial artist, who now posed aggressively for their enjoyment. He was the patient. They were the doctors. For science.
“Also, the females eat their husbands after having babies. I’m glad your mother isn’t hungry enough to eat me. Though I wouldn’t mind a little…” father’s voice trailed off.
Uninterested in father’s facts, the boys retired to Taylor’s bedroom, leaving their mantis friend to contemplate the meaning of life in solitude, unless perhaps he fancied discussing philosophy with Bob. The boys quietly closed the door, having explained many times over the need for privacy when conducting top-secret comic book trades. And there were trades, indeed, but no comic books. First, one boy would carefully lean their back against the door to prevent anyone from walking in unannounced, while the other boy knelt in front of the other to fulfill the set of dares they’d agreed to earlier in the day. In this fashion, they took turns fondling various parts of each other’s bodies, which evolved into many first times, in hopes to understand what it all would feel like.

Lining the top of Taylor’s bedroom wall, a parade of Hobie Cats drifted and lulled, swelled and rocked, their blue hulls pleasantly slobbered in the greenish-yellow haze of his Cape Cod nightlight. Taylor’s back ached. The stiff mattress wouldn’t give. His toes flexed forward, his quads tingled. As he watched flecks of popcorn ceiling scatter like ants across his drowsy gaze, he could hear electricity sizzling deep inside the nightlight. The scent of garlic and marinara wafted down the hallway.
The thermostat in Taylor’s bedroom clicked. It clicked. And clicked. His body felt foreign. His pelvis ached. What concerned him most, though, was a tickle of pain that sprouted like a weed in his belly and suddenly flowered there. He nervously explored his body with the tips of his fingers, self soothing. His skin felt soft and tender. His father had read to him that night, as he did almost every night. These were the fondest and most comforting of his memories, yet he still felt vulnerable.
He fingered his bellybutton, praying for sleep. Instead, his obsession, an unusual fear, blossomed once again. He was certain that his belly, through that little button he poked and prodded, would eventually be punctured, perforated, sliced, or diced. He wasn’t sure when, and he wasn’t sure how, but Taylor couldn’t shake the thought. To make things worse, a recurring dream keep stealing any hope he had of rest. And tonight would be no different.

His body rolled around the plain, dusty mattress until he heard the rattling. As he crept toward the door, his pea-sized toes curled into the clean carpet. The rattling became a knocking. The knocking became a rasping. When he opened the bedroom door: nothing, and yet the sound persisted: knock, click, knock, click.

As Taylor crawled towards the front door, the sounds grew more severe: a slamming, a slashing, a flogging. He clenched his eyes tight, as he opened the door, and couldn’t bear to look. The sounds evolved into puncturing, perforating, slicing, and dicing. When he opened his eyes, he found his body tied to the metal piping of the irrigation valves that sprouted from the side yard of his house. 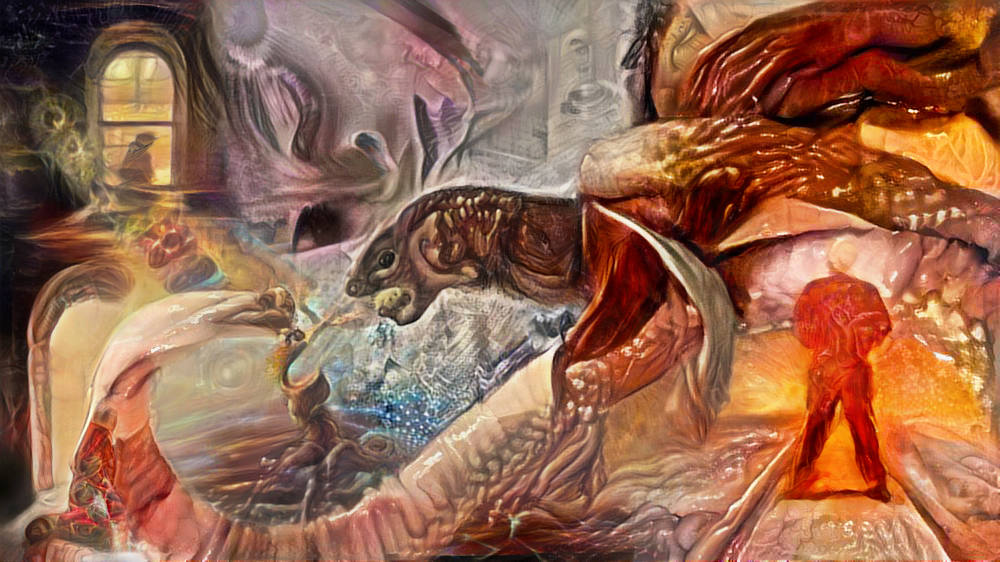 As Taylor struggled against his restraints, he shook his head violently; in the commotion, he found himself back in his bed, a serrated knife somehow stuck to his ceiling.

Eye to eye and head to head,
This shall end when one is dead;
Turn for turn and twist for twist—
Hah! The hooded Death has missed.

Taylor wasn’t as alone as he felt. And he was loved, too. So, what to make of this?